What is Yarn Bombing?

The Beginnings of Yarn Bombing

Yarn used as an artful covering has been around for generations. Anyone remember those crocheted babydoll toilet paper covers?

Beyond household decorations, covering objects with yarn as an outdoors art form is also not new. Just look at the 1990’s Yarn Works sculptures by artist Bill Davenport.

But the first “yarn bomb” as we understand it today is credited to Magda Sayeg, who made a knitted door handle cozy for her Texas boutique in 2005. 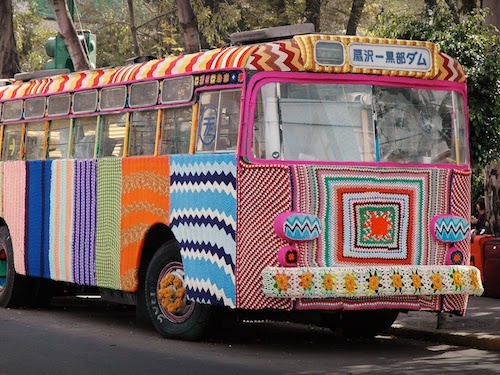 Her inspiration was simple: she wanted to brighten up an otherwise common object. "Taking inanimate objects and having them come to life" is how she describes the process.

Currently Magda is a globally recognized textile artist who gave a Ted Talk about her experience.

Since 2005, yarn bombing has grown into a worldwide movement with knitters and crocheters creating many yarn covered objects around the world. 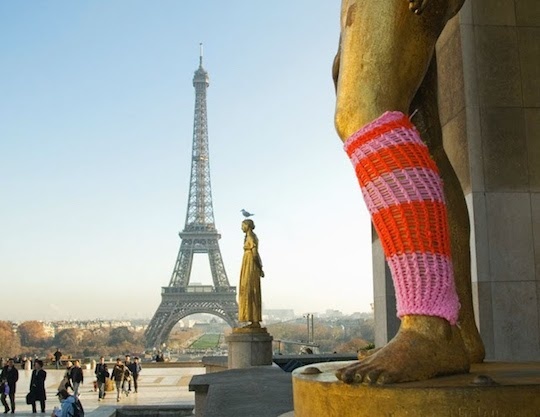 Lauren O’Farrel became known as the “sneaky graffiti knitter” Deadly Knitshade in 2007, founding Knit the City in London in 2009 and notoriously yarnbombing a Telephone Box in Parliament Square.

David Cole won the coveted $25,000 Rappaport Prize in 2009 for his knitted installations.

Stephen Duneier, known as Yarnbomber, began installing large-scale yarn art in 2013 in the mountains of Santa Barbara, from covering an entire tree to making a massive, neon spider’s web. Suddenly, yarn bombs were sprouting up all over the world.

With fame, of course, comes criticism.

Is something as innocuous as yarn considered to be graffiti?

Some say yes. There are opponents to these forms of “street art” who argue that it is a violation to mark public property in any way, and consider it a form of vandalism.

Some argue that environmentally it could be bad for trees to have “cozies” wrapped around them. I have heard people call it “litter,” or complain when the installation gets dirty or fuzzy after time.

But most see it as a refreshing pop of color on an otherwise drab object.

It makes us look at these objects with new eyes and brightens the mundane. I liken yarn bombing with sidewalk chalk – colorful and easy enough to remove – and oftentimes carrying an important message. 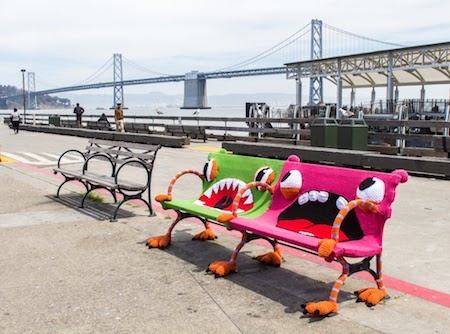 Craftivism Brings a Voice to the People

For years now, crafters around the world have been subverting the idea of “women’s work.” Fiber crafts like knitting, crocheting, embroidery were long dismissed by the patriarchal lens as dainty homemaker hobbies and nothing more. Feminine qualities were not valued, and working with yarn was considered steadfastly feminine.

These days, women (and men) are beginning to loudly proclaim the real value of feminine qualities, including textile work like knitting and crocheting. I could go on and on about how the relationship of femininity and crafts have evolved in recent years, but that’s a blog for a different day. The result was, suddenly “women’s work” had a purpose in the public sector, Beyond the obvious utilitarian function. Textile work has even played an important role in politics and activism.

Something as historically feminine as knitting & crocheting can become a political statement, colloquially referred to as Craftivism. For instance, taking something as unassuming and “soft” as yarn and covering a war tank, or creating a crocheted hand gun sculpture – these acts send a very powerful anti-war, anti-violence message to the observer. 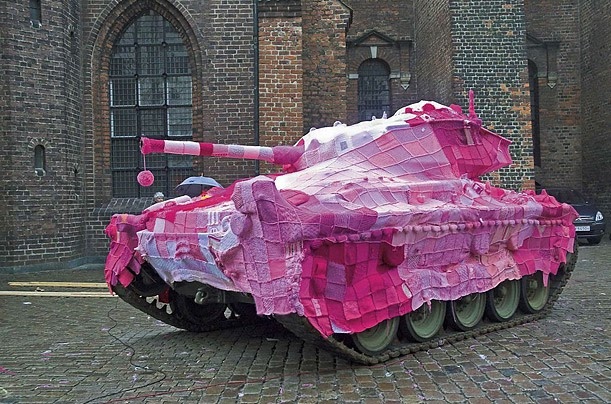 You may have been aware of the famous Pussyhats during the Women’s March of 2016, a burst of pink declaring solidarity for women’s rights.

An Australian community called Knitting Nannas Against Gas uses craftivism to criticize “the destruction of our land and water by exploration & mining of Coal Seam Gas & other non-renewable energy.

Maureen Daly Goggin put it well in Joie de Fabriquer: The Rhetoricity of Yarn Bombing “For many crafters, hand work is a dynamic response against the separation of labor and domestic skills, the split between public and private, the disconnection between mass made and handmade, the division between producers and consumers, and the other binaries rendered by modernity and the industrial age.”

That said, the beauty of textile crafts is that they can exist both inside and outside of politics. 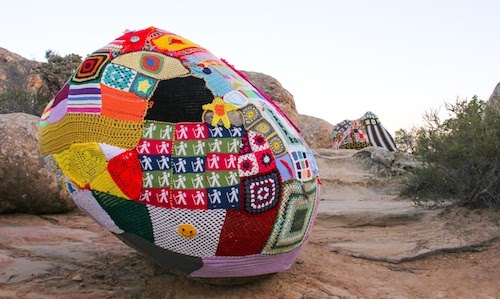 Agata Olek’s famous covering of Wall Street’s “Charging Bull", often misinterpreted as a challenge to ideas of hypermasculine aggression, was actually installed as a whimsical (if unsolicited) Christmas present to New York.

Ironically, the Charging Bull itself was a politically-driven illegal installation in 1989 that was allowed to remain as a permanent fixture, whereas Olek’s innocuous bright pink addition was removed after only two hours. Some yarn bombs can be misconstrued as aggressive graffiti when they are only meant to be aesthetic delights.

Luckily, in some areas, yarn bombs are supported and adored by the communities in which they are installed.

You may have seen some knitted objects right here in Santa Rosa!

The City of Santa Rosa commissioned us years back to cover the Railroad Square area lamp posts with yarn. We had volunteers help us with the knitting and crocheting for several weeks before finally installing them all together on a Saturday afternoon. They were up for about two months and really brightened up the neighborhood – and started some great conversations.

Santa Rosa currently has an active yarn bomber – Judy Kennedy! She has also been commissioned by the city to do some projects, and does her own “bombing” around town. The pole in front of Spinster Sisters seems to have a new lively covering seasonally. Look out for an upcoming interview with Judy in a future blog post!

Yarn bombing has a storied history. It is colorful and loud and hard to ignore, and whether or not it is making a specific statement, it is certainly being heard. I for one am delighted whenever I come across a new yarn bomb in public, and hope to continue seeing them for the rest of my life. 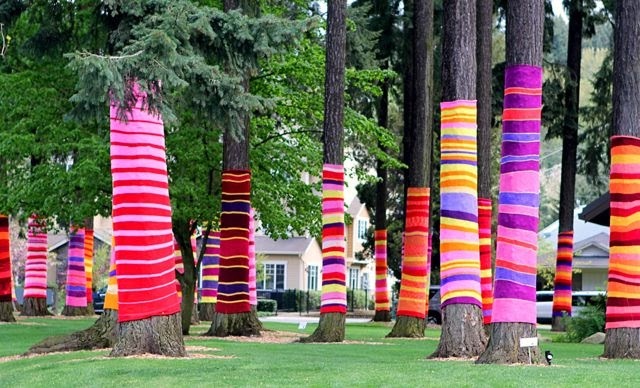 Leave a comment
Recent articles
Tags
Please accept cookies to help us improve this website Is this OK? Yes No More on cookies »
← Return to the back office    Store hours are Wednesday - Monday 11-4 (closed Tuesdays) Hide